A lot of things could be wrong with this ad.

Beyonce and her husband since 13 years, Jay-Z, strike a pose in one of the most lavish advertisements launched by one of the biggest jewelry retailers in the world. The Tiffany diamond, worth 2 million dollars, worn by only Audrey Hepburn and Lady Gaga, embraces Beyonce's décolleté in an ad by Tiffany & co.

With black artist Jean-Michel Basquiat's Equals Pi in the background, a voluptuous diva known to "champion" black rights, and a Jay-Z imitating Basquiat's freeform dreads, a lot of criticism on the political correctness of the ad was to be made.

The ad that comes off as a benevolent piece of a fairly "woke" marketing campaign has sparked controversy not only among the famous painter's colleagues, but also among those who appreciate the inherent struggle and sentiment behind Basquiat's works.

The superstar, who shares a joint net worth of over a billion dollars with her husband, boasts about becoming the "first black woman" to wear the 128-carat jewel. The diamond was attained in South Africa in 1887 at the Kimberley Mine by Charles Lewis Tiffany, who founded Tiffany & co.

From square one: Charles Lewis Tiffany, who "obtained" the Tiffany diamond from South Africa, most likely did not merely obtain it.

The 1880s was a time when South Africa and other countries on the continent witnessed an influx of colonizers to reap the lands of their riches, namely precious stones. European colonization and monopolization of African mines, for millions, was and still is synonymous with raping, drugging, oppressing, and enslaving tactics towards Black folk who sought to work in their own land. “No Native shall work or be allowed to work in any mine whether in open or underground, except under the responsible charge of some white man as his master," asserted a decree by Chamber of Mines in 1889.

The natives were not allowed to bring their wives and children with them, could not leave the mine, and if they wanted to leave, they were locked into a cell and dosed with mild laxatives for 5-10 days.

This all comes to raise questions about black rights - what is true emancipation? Could it be the well-being of the collective free from the shackles of supremacy and White colonialism? Or is as it seems, the equal ability to oppress?  It's not that Beyonce was the one who enslaved the Black miners in Africa - but why wear the diamond as though it were some sort of trophy of Black greatness? Does the emancipation of black civil liberties shift the race from 'enslaved' to slave master?

No doubt that the ad is tone-deaf towards economic stratification; what is more tone-deaf is the preacher.

The artist's paintings represent reflections of a multitude of power struggles - social, economic, and political - in the United States. Should a jewerly company with a history of black enslavement be allowed to appropriate such paintings?

Tiffany's purchased the painting, which infuriated many artists and curators. “They wouldn’t have let Jean-Michel into a Tiffany’s if he wanted to use the bathroom, or if he went to buy an engagement ring and pulled a wad of cash out of his pocket. We couldn’t even get a cab,” Stephen Torton, Basquiat's assistant, told the Daily Beast.

Tiffany continued to rationalize the monopoly of the painting by saying that the blue in Basquiat's painting resembles the company's Tiffany blue color, which essentially used the painting as a gateway marketing campaign strategy to further sell their products. However, the mere commercialization of the work of Jean-Michel Basquiat, who is a voice against power abuse and police violence did not go too well with a blood diamond ad - in fact, it backfired.

“I designed and built stretchers, painted backgrounds, glued drawings down on canvas, chauffeured, traveled extensively, spoke freely about many topics, and worked endless hours side by side in silence,” Torton asserted on Instagram. “The idea that this blue background, which I mixed and applied was in any way related to Tiffany Blue is so absurd that at first, I chose not to comment. But this very perverse appropriation of the artist’s inspiration is just too much.” 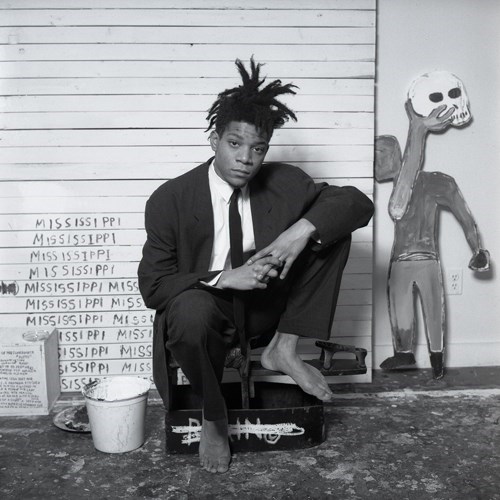 The function of the ad nonetheless is to sell Tiffany's products to an extremely wealthy audience - however, the priced-at-millions piece of expressionist art in the background speaks a different language. Al Diaz, who was a close friend to Basquiat and collaborated with him as a teenager on a street art duo SAMO, spoke of the artist's perception of wealth: “People think that his association with luxury was because he was impressed with that s**t, but he couldn’t care less,” Diaz explains. “It’s not just about wearing an Armani suit. If he wore it, it’s because he could buy it and f**k it up, it wasn’t because the stitches were fabulous or well-made.”

His ex-partner and roommate, Alexis Adler, also weighed in on the purchase of the painting: “Unfortunately, the museums came to Jean’s art late, so most of his art is in private hands and people don’t get to see that art except for the shows. Why show it as a prop to an ad?” asked Adler. “Loan it out to a museum. In a time where there were very few Black artists represented in Western museums, that was his goal: to get to a museum.”

Another Case of 'Woke' Capitalism

Whether the ad is stamped as hypocrisy or immorality, there's one thing we can't argue: Beyonce, at large, has managed to brand black activism by appealing to the logic of the supremacist - and it's working. Tiffany wants to sell that diamond, and the diva sure as heaven wants a slice of representation as a token added to her branding.

The demise of anti-discrimination activism does not lie in hands of the colonizer - no. It lies in the hands of those who claim activism while appealing to the capitalist logic of the colonizer. The liberal branding of black struggle will only sink the black working class deeper in inequality while strengthening authority.

END_OF_DOCUMENT_TOKEN_TO_BE_REPLACED

The Lucifer Effect: What Kind of Monster Are You?

Sinophobia Meets Prison Labor in a Think Tank Down...

Iranian Diesel Makes It to Lebanon Through Syria

END_OF_DOCUMENT_TOKEN_TO_BE_REPLACED

Mousavi: Regional Terrorists Collaborated with the Mossad, US...