The Divided States of America: Voter concerns will choose the US' fate

There's more behind the scenes of what the US is dealing with and what newscasts show, as the social and structural issues challenging Americans today will alter the face of America tomorrow.

As the US juggles massive unemployment, poor infrastructure, oil and gas price increases, food shortages, a near-recession, and mass shootings, funding the war in Ukraine continues to be the top priority on the Biden administration agenda – but that is the least of the American people's worries.

With the midterm votes reaching the finish line on November 8’s Election Day, it will be decided whether the Republicans or the Democrats will have the upper hand in Congress and the Senate. It’s not just who the people want; it’s what they want and who answers them.

Midterm elections are not presidential elections, as in they don’t decide which potential candidate will win the presidency, but instead, representatives of the House and Senators are elected, and they will, in turn, influence which candidate in 2024 takes office. The House of Representatives has the ability to make and pass laws and assess the current administration it is serving. The Senate’s duties include amending and approving laws, assessing presidential nominees, and conducting impeachments of presidents.

2022 has been a rollercoaster for the US, between taming Kanye West and his rants, mass shootings becoming a daily staple of American life, Donald Trump’s FBI bust, and almost starting World War III with China. But as the US defines itself as a representative of democracy, in the sense that the people elect who represents their wants and needs, it is the matters taking the country by storm that will eventually alter the direction of the 2024 presidential elections.

According to a Pew Research Center survey conducted between October 10 and 16, 2022, the leading concern on voters’ minds is the economy and its fate. 79% of the registered voters recorded the economic situation as their main worry, with 92% of voters who identified as Republican seeing it as a "hot topic". 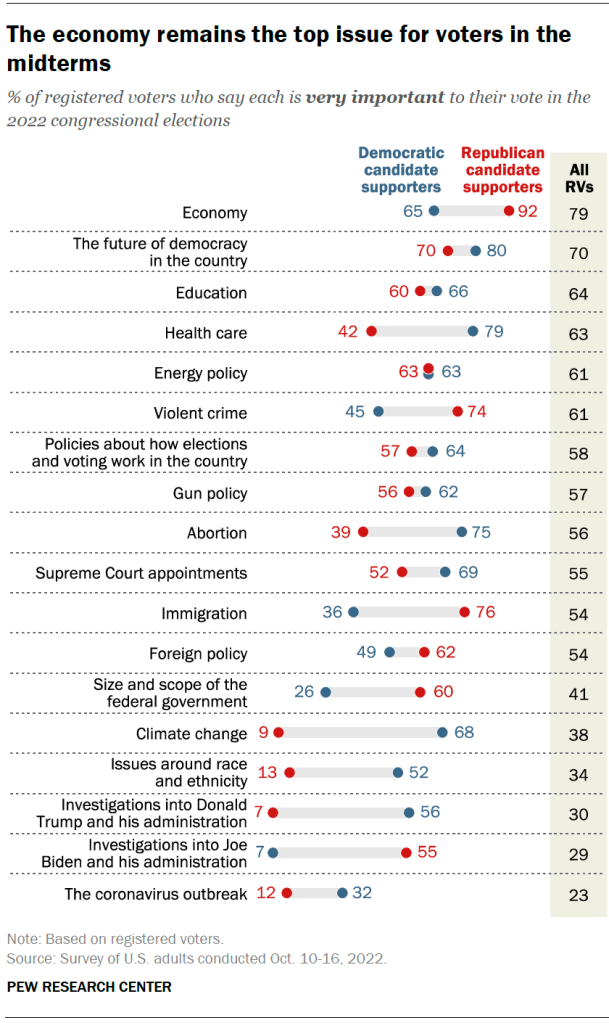 Inflation in the US hit a 40-year record high in June, reaching a whopping 8.6% and driving interest rates sky-high. The Biden administration is struggling to hold on to the rope to safety as it continues to fail to hold on to its promises of reviving the economy and bringing the country back on its feet after the Covid pandemic – ever since Biden assumed office in 2020.

A report by the US Bureau of Labor Statistics released in September exhibited the rise of the Consumer Price Index (CPI) which measures the change in prices that consumers in a country pay by 8.2% since September of last year. These may all be numbers that may not seem marginal or significantly differential, but the more these percentages keep racking up, the more imminent is a recession and the fall of American global economic hegemony.

What’s even more shocking is the answer to the question as to where all this increase in money is going if policies keep adding on and no improvements are shown.

US national outstanding debt has exceeded $31 trillion as of October. The US is grappling with a dangerous combination of inflation, high-interest rates, sky-high consumer prices, unstable social structure, climate crisis, and environmental racism, but budget priorities surely go to the military.

In light of the war in Ukraine, more than $15 billion has gone to Ukrainian President Volodymyr Zelensky’s forces – not including payments made under sugar-coated nomenclatures, such as "security packages". Republicans are becoming increasingly opposed to the excessive and incontrollable transfer of money and arms to fund Ukraine’s forces.

Gun violence becomes the main cause of death among youth in the #US, as successive administrations struggle to curb the problem that has been haunting the #American people.#GunViolence pic.twitter.com/FH2JnWiJMY

Mass shootings are so “excessive” that they have become expected to be part of the daily news broadcast in the US, and in turn across the world. On May 14 of this year, ten were killed in a grocery store shooting in Buffalo, New York. Ten days later, on May 24, 19 children and two adults were murdered at Robb Elementary School in Uvalde, Texas. A week later in June, four were killed at a hospital in Tulsa, Oklahoma, and a month later on July fourth, seven people were shot and killed at an Independence Day parade in Highland Park, Illinois. The Pew Research report showed 57% of voters were stressed because of gun violence, with 62% being Democrats.

The matter boils down, however, to the Second Amendment of the US Constitution, which stipulates the right to bear arms for the purpose of self-defense, but with the abuse of that amendment as a shield, gun violence continues to go rampant across the nation, instilling fear into Americans and becoming a growing factor in fearful nationalism.

Read more: Fear from election violence in the US on the rise

The Pew Research report demonstrated the top issues in the US as of current, but by party: Democrat-identifying voters showed concern in areas of education reform, gun control, climate change, healthcare, abortion, and systemic racism. On the other hand, Republican-voting counterparts were concerned about the economic crisis, crime, immigration, and foreign policies, which Biden expressed that Republicans have 'no sense' of, worried that if Republicans win in the midterm elections, total US military assistance for Ukraine may diminish after US House Minority Leader Kevin McCarthy's pledge that Ukraine will not receive a "blank check" for aid if the Republicans win the majority of seats in the lower house of Congress.

In regard to abortion, whether candidates advocate reinstating the Roe v Wade decision to allow abortion to be legal again or whether they are against it majorly sways the midterm results, and thus the 2024 presidential race, especially by voters who are women. The 50-year-old decision now bans abortions across the US with only a few states left allowing procedures to continue, such as New York, California, and Utah.

Student debt also appeared on the polls for voter concerns, following Biden’s announcement in September of plans to cancel up to $20,000 in student loans and debts, which has students racing to fill out applications for the forms as unemployment rates rise and wages remain relatively insufficient to meet the cost of living in the US.

Biden’s popularity keeps sinking as the economy deteriorates even further, and the midterm elections serve as his last remaining lifeline – with not much hope in sight either. Americans remain in a complicated relationship, asking the government “what are we?” while the government scurries to meet the people's demands, but effectivities remain in lingo.

Read next: Republicans expected to flood the House

The US midterm elections will be held on Tuesday, Nov. 8, 2022. The Elections come at a time when the schism between Democrats and Republicans is widening even further, while the balance of power in both the House and the Senate is up for grabs.